Get out your cheekbones and turn up your coat collars

Sorry for the delay in posting the review for Sherlock Series 2 Episode 2, but I’ve been a tad busy this week! 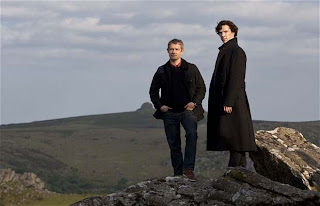 So, like last week, HAN and I decided to watch the second instalment together, but at her house this time. (I would like to take a moment to point out to all readers that I did wear my Benedict Cumberbatch t-shirt for both viewings.I don't let the side down haha.)  And I think we wanted to know the same thing as the rest of the country: what were they going to do with the dog?

Well, in simple terms, something very different to what Arthur Conan Doyle did with it. I’m not sure they had hallucinogenic fog in his day. I must say, this was an extremely clever take on the many adaptations of ‘The Hound of the Baskervilles’ that seem convinced that the Devon moors are constantly shrouded in mist. Okay, so they may not be the tropics, but they’re not that bad. Honestly...

But let me go back to the beginning, before Sherlock and John made it to Devon. One of the biggest ‘laugh out loud’ moments has to have been the “shut up and smoke” part, involving some outlandish acting from Benedict while Martin Freeman as John tried his utmost to keep a straight face. Also worth a massive mention (skipping back to Devon again) was the Land Rover. Well, to be more precise, Sherlock driving the Land Rover. Forget the “where did they hire it from” question: when did Sherlock learn to drive?

So, there were quite a few allusions to the book littered throughout the episode: Major Barrymore with his beard, Dr Mortimor, Sir Henry Baskerville becoming Henry Knight, and, of course, Dr Stapleton, the red herring. I must say that HAN and I did pick up on the “cell phone” reference from Franklin, but I am claiming absolutely no credit for guessing that he was the man behind it all, because, quite frankly (note the pun), I didn’t. And just when we thought John had deduced something for himself with “UMQRA”, it turns out it was actually a different sort of “dogging”. Bless him. 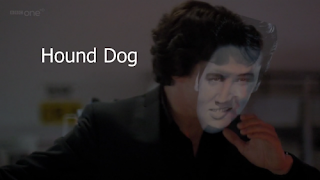 There were an uncountable number of awesome moments, a few of my favourites being possibly the best camera shot EVER involving the lift doors, as well as Benedict trying to hold back tears, which may have produced a few “aww”s from me and HAN. Such a shame it was drug induced. This review couldn’t be complete, though, without a special mention of the mind palace scene. BEST BIT BEST BIT BEST BIT! Some gobsmackingly awesome improvisation from Benedict, coupled with incredible computer graphics and the hilarious Elvis moment just made it for me. Yes. Just yes.

So, this leaves me looking forward with mega anticipation to this Sunday’s episode – what was Moriarty doing in that cell?...

Anyway, I must wrap this post up – I need to go to my mind palace.

HAN and BB. Me again!

Your website is brilliant. I love the mind palace. I want one. I love the way he can control it with his hands. I am totally Sherlokcked. Anymore Sherlockians out there. Dr Stapleton was my prime suspect. Thanks again.

Sherlock and John #1 fan ever!