Hello again readers, it’s BB here. It seems like ages since I last blogged, so my apologies. Please forgive me.
Just thought I’d bring to your attention the trailer for ‘War Horse’, a Steven Spielberg film based on the book by Michael Morpurgo, in which Benedict Cumberbatch is starring as Major Stewart. Again, I must confess that I haven’t actually read the book, although a few years ago I did see the New London Theatre’s production of it, which was magnificent, and I highly recommend that you go and see it.
So anyway, 'War Horse' is set in World War I, and is basically about the bond between a boy and his horse, which is sold to the cavalry when the war breaks out. I can’t remember all that much of the plot, which, to be perfectly honest, is probably a blessing as it means that I can’t reveal too much / ruin the ending for anyone.
Being a Spielberg film, I’m sure that it will contain some amazing shots and images, hopefully including quite a few of our man BenMaBeb. I found a little interview of him and a couple of the other members of the cast - the sound quality isn't all that great, but it's Benedict, so I really don't mind:
So, War Horse is out on the 13th January here in England. It's a long way off, but hopefully it'll be worth the wait! We've got 'Tinker Tailor Soldier Spy' to keep us Cumberbatch fans going until then anyway. As a little side note, I did order the book off Amazon and start reading it, but at about page 50, I realised that all the technical spy jargon was a bit too much, and I reckon I'll just watch the film instead. Don't get me wrong, I do love reading and have a pretty extensive book collection, but Le Carré certainly isn't casual holiday-by-the-pool reading. I might go back to it later after I've seen the film.
Thanks for reading, and please do subscribe, comment and spread the word. (I know we keep asking, but it really would mean a lot to us.)

Ok, so this is where I get a bit fangirl stalkerish, but the issue I am going to talk about deserves some recognition. Just take a good, long look at the photo montage below. Take your time...I'll be waiting for you at the bottom. 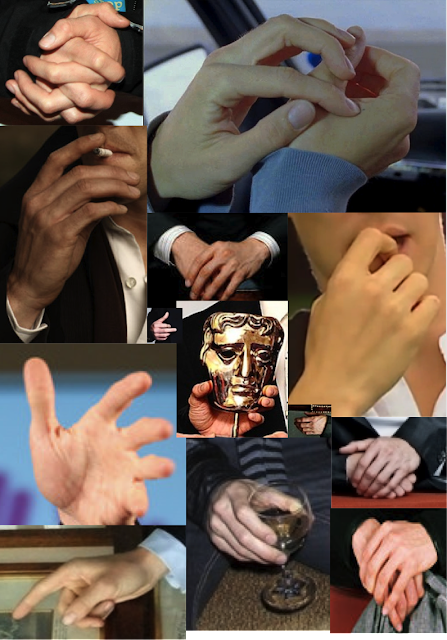 When BB and I talk about Benedict, the end of the conversation always ends with:
"How are amazing are his hands?.......ohhhh....his hands!"
or words to that effect.
Now there aren't many men who have more beautiful hands than this. I wish I had such slender and long fingers because, apart from being droolingly gorgeous to look at, they are very useful. They are good for:
Ok, I'm waffling now, but what else can you say about something so perfect? I just think that BenMaBeb's hands should get a bit of recognition.
HAN :)
Bit of trivia: In October 2010, Benedict had a cycling accident and injured one of his GORGEOUS hands :( Thankfully, it was only minor. (Breathes a sigh of relief)
Posted by BB at 15:06 3 comments: 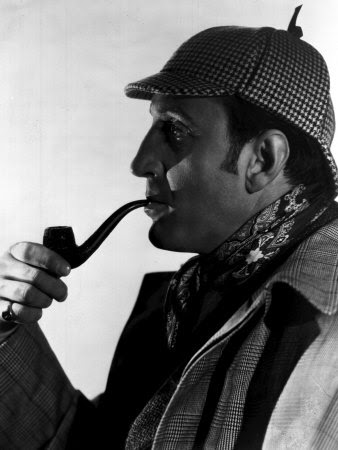 When you think ‘Sherlock Holmes’, a deerstalker hat, large pipe and magnifying class come to mind, as portrayed by most adaptations of the series. But, to be honest, if you’re going to bring this detective into the 21st century, you can’t exactly have him running around in Victorian style clothes, can you? Not while he’s texting, anyway. One of his main traits in the original books is, after all, his ability to disguise himself. Equally, he’s not going to be dressed in jeans/trackies and a hoody. That would be weird. So in stepped costume designer Sarah Adams:

"Holmes would not have any interest in fashion so I went for classic suits with a modern twist: narrow-leg trousers and a two-button, slim-cut jacket. I also went for slim-cut shirts and a sweeping coat for all the action scenes.” 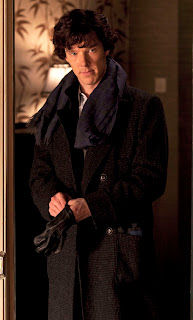 And, wow, did she get it right. Everything about the outfit works, setting Sherlock apart from his fellow characters in terms of sophistication, while still managing to fit into modern day London. And, of course, part of this has to come down to Mr Benedict Timothy Carlton Cumberbatch. The way he carries himself, giving off an air of superiority, and also the fast-paced scenes where the coat embellishes his every move, help to give this 21st century Sherlock a somewhat other-worldly presence, that I think we all very much enjoyed.

And it seems it wasn’t just me who was left in awe at this wondrous item of clothing; Belstaff put the trench coat worn by Benedict back on the shelves due to popular demand, however, unsurprisingly, at a WHOPPING £1350, not many actually sold. It seems that Sherlock is not left wanting when it comes to money; each Spencer Hart suit cost close to £500, and the Dolce & Gabbana shirts cost an equally GOBSMACKING £155. Wow. But it’s definitely worth it for that look.

Anyway, I’m going to sign off now with a "yay!" that we have our first member! Please, please, please can any lovely readers out there also click the button to 'join this page'; we promise to make it worthwhile with lots of posts! And also, feel free to comment on the blog with your thoughts, opinions, ideas, any Benedict ramblings, and also any suggestions for future posts that you’d like us to write.

"So it is that Britain's latest men's style icon is a fictional asexual sociopath first seen onscreen hitting a corpse with a stick."    ---  Alexis Petridis, from The Guardian
Posted by BB at 16:26 1 comment:

Check this Film Out at a Cinema Somewhere Near You

Based on John Le Carré’s best-selling novel, which I must confess I haven’t read (although it is on my list), the film Tinker, Tailor, Soldier, Spy is set for release on 16th September this year, and looks pretty spectacularly awesome. Set in the 1970s, our wonderful man BenMaBeb plays Peter Guillam, who is tasked with finding the mole (traitor) within MI6. I'm not going to shower you with details, as I don’t have them, but a second official trailer has just been released, and it's definitely worth a watch:
So, readers, if you are out there, I most definitely advise you to go check this film out at a cinema somewhere near you; I know for certain that I will be, quite possibly with my fellow blogger HAN. And our viewing will be followed by at least one review / quotes sesh / post related to the film, so it would be highly beneficial for you to have watched it too, as then you will be in a better position to comment!! Go on, you know you want to! And if you are out there, it would also be much appreciated if you would click on that button to the right of the screen in order to follow us - it would be nice to know that our posts our being enjoyed, and that there are others out there who appreciate Mr Benedict Cumberbatch as much as we do.
Thanks,
BB :)
"Try not to start a war before you get home - you know what it does to the traffic"
---Sherlock to Mycroft
Posted by BB at 17:50 No comments: