I'm sure you will all be thrilled to know that the air date for the first episode of Sherlock Series Two, A Scandal in Belgravia, has been announced, and fortunately it's not too long to wait! The episode will air at 8:10pm on BBC One on New Year's Day, so I suggest you all put a little red cross on your calendar, or an alarm on your phone, or a reminder on the TV (etc. etc.), because I'm making an educated guess that some of you may still have headaches at 8 o'clock, and will therefore need something to tell you to plonk yourself in front of the television. DON'T FORGET! 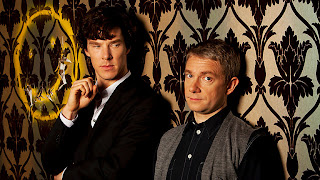 You've also now got sufficient time to read (or re-read, in any true Holmes fan's case) 'A Scandal in Bohemia', the book upon which the episode is based. Having read many Holmes books myself, I must say that it is extremely satisfying to pick up on the slightest of details and allusions from the originals that are littered throughout the episodes. I'm not going to lie and say that I picked up on all the allusions, as I haven't read nearly all of the books, but I think that's one of the beauties of the Holmes series; there's always more to read, and once you've read them you can re-read them and still be strung along by the plot. It's also one of the wonders of the writing of Sherlock; that they are able to include so many details from the Conan Doyle books, but still come up with new, original, Sherlock Holmes adventures.

One of the main attractions of the new series will obviously be seeing the awesomely brilliant partnership between Sherlock and John, acted of course by the gobsmackingly talented Benedict Cumberbatch and Martin Freeman. It should be fascinating to see how their friendship develops, as well as their interaction with both Moriarty (Andrew Scott), and new-on-the-scene Irene Adler (Lara Pulver). But first, they've got to get themselves out of a somewhat sticky situation in a swimming pool...